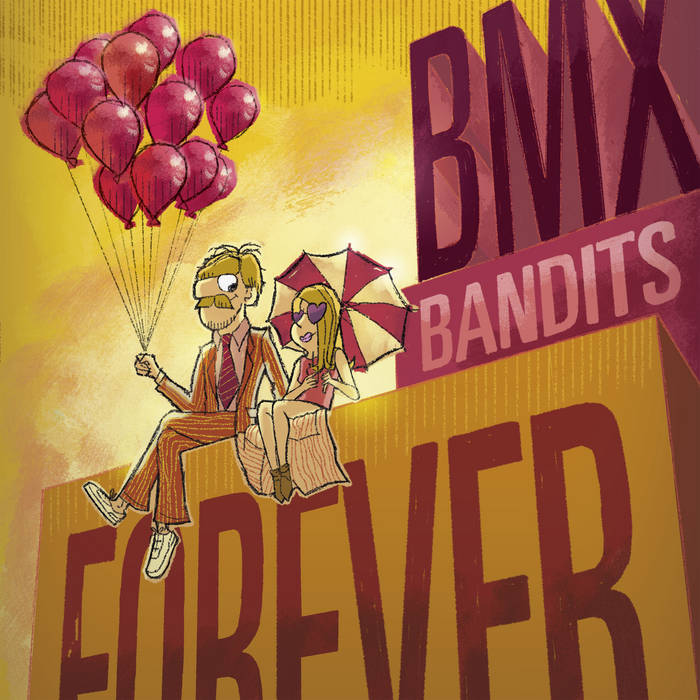 Nick Green Thanks to 'one chord' once more for the heads up- god knows how this artist is new to me....Brian Wilson should have written this... oh,he did! Favorite track: Forever.

Is it possible that, after more than 30 years in the music business, Duglas T Stewart has, in 2017, made his best album? It is clear that the element of surprise in albums like “C-86” and “Life Goes On”, or even in their first singles on the label, “53rd And 3rd”, or the 1992 single “Serious Drugs”, now feel very far away. But objectively, the collection of songs included on “BMX Bandits Forever” could be the best thing in their whole discography. Without letting go of their identity, or even of their obsessions and hang-ups.

If you are just arriving here with the whole 30-year career waiting to be discovered, we should remind you of a few things first. BMX BANDITS is the alias of Duglas T Stewart, who before that was in THE PRETTY FLOWERS (is “Sing Street” based on them?), the band he shared with Frances McKee (THE VASELINES), Sean Dickson (THE SOUP DRAGONS) and Norman Blake (TEENAGE FANCLUB, BMX BANDITS). OASIS did their first UK tour dates supporting BMX BANDITS as a favour from Stewart to Creation label boss Alan McGee. Francis MacDonald (TEENAGE FANCLUB, NICE MAN) was a member of the group and Duglas’ right-hand man until 2005. Kurt Cobain said that if he could play in any other group, it would be in BMX BANDITS. The Guardian says “Britain’s ultimate cult group”. Another major magazine like Q says "Gentle genius". And even with all of that, he has always been a figure in the development of the emerging Scottish pop scene. If you don’t believe us, just ask Ally Kerr and BELLE & SEBASTIAN back then, or to name a few others who aren’t very well known yet, TEEN CANTEEN and HAPPY MEALS.

So, why isn’t this the most famous group in the world? That is part of the legend, of that figure of the secret great man that Stewart transmits, of his brilliance, of his lyrics – sometimes hilarious and sometimes raw. For example, we could remember the release of what many consider to be their best song: “Serious Drugs”. On Radio 1, all the DJs said it was going to be their definitive leap to fame, that all the ingredients were there: Creation Records at its high point, the group in the spotlight, the song… But that week they couldn’t play the song on the radio because it coincided with an anti-drug campaign. That’s just a small drop in the story of a man as passionate as they come, in his own way, like Vic Chestnutt, Stephin Merritt, Daniel Johnston or Jeff Mangum. It’s not for nothing that there was a DVD documentary of his life called, “Serious Drugs - Duglas And The Music Of BMX Bandits”. If you need more, all the good material is there. Up to speed? Let’s move on to the new album.

But let’s do it little by little, because this is a moment to be cherished, and we should analyze every fragment, every note, every second. And there is a lot to work through, because we know that one of Duglas’ “obsessions” is to include a solid handful of songs on every album. This time, we have sixteen. And yes, as always, an unusual cover was slipped into the mix. In this case, a special version of Leonard Bernstein’s “Somewhere”, which was made famous in “West Side Story”, and also a cover of Marcos Valle’s “De Mais Do Que Valsa” (which, by the way, he wrote his own lyrics for, in English). This guarantees that Brazilian touch that normally makes an appearance on BMX BANDITS’ latest releases. We also have the exercise in musical wisdom: “That Lonely Feeling” is a cover of the sister-duo, THE MCKINLEYS, who only released 4 singles between 1964 and 1965, and who worked with bands like THE ROLLING STONES and THE HOLLIES. It’s delicious. And, of course, that “Forever” by THE BEACH BOYS that gives the album its title. It was also recorded by AMERICAN SPRING, the band formed by Brian Wilson’s wife and her sister, whose only album was produced by Brian himself. This is all a statement of intent, that halo of classicism, of emotion, of elegance; of that time when pop was king.

And of course, throughout the songs there is that variety of styles that has classified him as a great music-lover all over the world, and that classic spirit that reminds us of Michel Legrand (“My Girl Midge”), Phil Spector (“No Matter What You Say”), Burt Bacharach (“That Lonely Feeling”), and THE BEATLES (“Way Of The Wolf”) is also there, as is that beyond-perfect, lively, vital, colorful, solid pop with Scottish pedigree (“Saveoursmiles” written with Francis MacDonald for the album they made with Yeongene a few years ago, and “Life Without You”). We have a new female voice again, this time with the presence and prominence (not only on vocals, but also on multiple instruments) of Chloe Philip, who is amazing on some of the album’s best songs, like that marvelous “Love Me 'Till My Heart Stops” that moves us and saddens us at the same time, and that she wrote. Pure emotion. Like that “How Not To Care”, a mysterious mid-tempo that slowly lets the light in between synthesized rhythms and cushions of keyboards, halfway between FUTURE BIBLE HEROES and EAST RIVER PIPE. Or the exquisite “It's In Her Eyes”, with that delicious intro that leads into a surprising melody that is agile, skilled, and that takes us to the best moments of Broadway musical. We can evoke a story of love and hate in that musical dialogue that Duglas and Chloe set up. And finally, as the cherry on top, that “Razorblades & Honey” that reminds us so much of Edwyn Collins at his most majestic, and includes the presence of Anton Newcombe (BRIAN JONESTOWN MASSACRE). In the end, we are reminded of what Stewart himself says, “I like art that bypasses the intellect and goes straight to the heart”.

But if there is a key name on this album, it is Stuart Kidd. Stuart is one of Glasgow's best liked and most prolific musicians. He originally joined BMX BANDITS in 2002 and after a short break away is very much back in the heart of the group. He has played with JONNY (Norman Blake & Euros Childs) as well as being a regular member of Euros Child's band. He has also played with LINDEN, GULP, Ian McCulloch, Nick Garrie, Francis Macdonald, THE PEARLFISHERS, BELLE & SEBASTIAN and more. Also he is a main writer and singer with his own groups THE WELLGREEN, KIDD, DR. COSMO'S TAPE LAB and POUND STORE RIOT. His participation on “BMX Bandits Forever” has been key, both for his production and interpretation work, as well as for his song-writing, giving us practically all the songs a little extra that raises them up to the altar we found them at. He is Duglas’s right-hand man on this journey toward eternity. This is a new journey that has been illustrated, once again, by Duprez, one of our favorite designers, who knows better than anyone how to package BMX BANDITS’ songs and reflect the visual universe that so captivates Duglas.

But we can’t forget something that has always characterized BMX BANDITS’ albums: the search for perfect love in the shape of a perfect pop song, and all the frustrations that arise from a fantasy like that. From fun to rough, expressing things that only Duglas T Stewart can articulate with words. In this case, there are several songs that coincide in the suffering of imagining the world without that perfect, absolute love, but that always let a little bit of light in, keeping hope alive in how important love is in people’s lives.

From here on out, “BMX Bandits Forever” is a classic – for their spirit (why that title, if not?) for their songwriting, for their inspiration, their references, their emotion. This album will definitively be one of the releases of the year for Elefant Records. And probably for Duglas T Stewart’s career. And, of course, for all of us who love pop. And music.