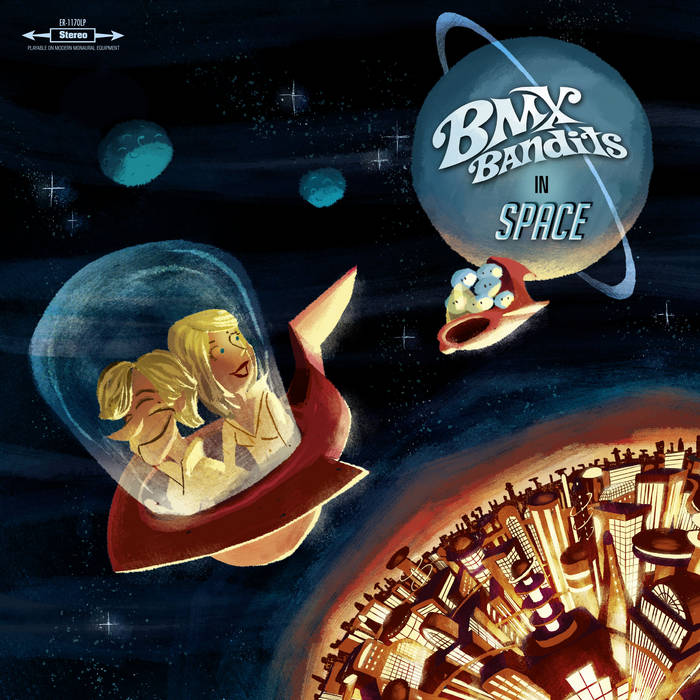 BMX BANDITS are putting out a new album on Elefant Records, this time a full-length with totally new material. The sixteenth release from Duglas T Stewart’s group comes surrounded by lots of big news. The first big news is that this new album includes the return of two of BMX BANDITS’ original members, neither of whom have worked with the group since its beginnings, sometime around 1985. Jim McCulloch (SNOWGOOSE, THE SOUP DRAGONS) is not only back in the line-up but also participated intensely in the song-writing process for many of the tracks, and Sean Dickson (THE SOUP DRAGONS) wrote the album’s opening and closing tracks. Second, another regular collaborator who has returned to the fold is the grandiose and ubiquitous Norman Blake (TEENAGE FANCLUB), who plays several instruments and coproduces the captivating “Still”. Finally, what we have here is a kind of space-pop-opera - one of the most magnificent works of art from one of the most charismatic characters in the history of indie pop.

“BMX Bandits in Space” tells the story of a man travelling through time and space in search of forgiveness and a way back home. Throughout the trip there are small flashes – some are memories and some are figments of his imagination. “Every song, every flash of music is like a piece of a puzzle that helps our hero discover how he wound up lost and wandering infinitely around in space, and what his particular idea of love was.”

After that overture, “Still” tells us about the vehicle that will take us through the story, a fragile and broken-down space ship, which moves between space-like choruses and toy-like arpeggios that were made with the collaboration of Japan’s PLECTRUM. “The protagonist remembers how his friends used to tell him that everything was going to be alright, but now he’s not so sure”, Stewart himself explains. “Beautiful Friend” begins with a bit of northern-soul only to wrap up with a touch of synthesizers (along the lines of a more danceable PAPAS FRITAS) that give the song the necessary spark for remembering an exotic woman who visits our astronaut in Scotland, the attempt at a new beginning that quickly vanishes like a puff of smoke. Was it all just a dream?

“Look at You, Look at Me”, with the collaboration of Argentina’s CINEPLEXX, and its fifties echoes, tells the story of a girl who appears in a dream, lost and scared. “He dreams that they both find love. And the end of this dream is a fairytale in the style of Jacques Demy”. That’s where “Like the Morning Sun” comes in, a pop delicacy with a sixties structure and echoes of lounge and soul. “Listen to Some Music” reminds us of music’s ability to comfort us with the perfect pop song. The song has an amazing melody, sunshine-pop voices, and a collection of colorful wind arrangements.

“Elegant Love” reinterprets “Elegant Lines” (an old song from BMX BANDITS themselves, and another collaboration with CINEPLEXX) with synth-pop to create a solid, wonderful song that gives a new style-counterpoint, which is their trademark. This sets the scene for “And It’s You”, which tells a story, amidst acoustic embraces and a sassy Casiotone, of a love that has ended but has left so many wonderful and unforgettable moments, not to mention a delicious new chorus. “You Disappointed Me” has our astronaut, the same as in “Fucked Up”, remembering friendships that have failed because of distrust and betrayals, and it brings us the most dramatic and theatrical moment of the album. These are surprising pieces with incredible arrangements and a great visual capacity, showing off the funky groove of “Fucked Up”. But “Fireworks” (written by the very young Carla Easton, whom we will be hearing more about soon) gets its optimistic tone back, with fifties-styled melodies and arrangements, as if Perry Como were sailing around in search of the deserted island where THE SHIRELLES were stranded.

“All Around The World” is the essence of the album, starting with that wonderful line, “I believe in beauty, and where ever it leads me, that’s where I’ll go.” As if ABBA and THE BEATLES let Bacharach direct them, Duglas explains the idiosyncrasies of love and the endless search in the face of the hope that there’s something to search for. “While We’re Dancing” paints a picture of a couple falling in love to a waltz beat, in a church hall, before the man goes off to fight in WWII. The protagonist himself sees the same scene, many years later, with the same couple, much older now, surrounded by friends, in the same church hall. Tom Waits would have wanted to this song to be in his early repertoire, with that beautiful, velvety violin…

Finally, “The Unforgiven”, another piece with great theatrical power, somewhere between Henry Mancini and F.M. Corndog, tells the story how in the final moment, when it seemed like the trip was never going to end, “an angel baths our hero in the light of love and forgiveness, bringing his journey to a sudden close, and he finds himself in green, hilly pastures, on his way back home, where love is probably waiting for him to bring him back to life.” Can you imagine what the musical representation of this angel is? We aren’t saying a word, considering that this one of a kind work of art requires thousands of listens, starting with that first hurried and bewildered listen when the unique melodies, the elegance, and the arrangements all captivate you right away, to those last listens when you scrutinize every single sentence about the protagonist and every sound has a key role in the story, like supporting actors with indescribable importance.

An amazing album topped off with an incredible album cover by Duprez, who is able to bring a vintage design style together with a space theme (as he already did for Elefant’s complication, “Space Escapade”), and who even knows how to bring colorful pop spirit to a lonely, star-filled outer space background. This is probably Duglas T. Stewart’s best piece of work yet, which, when talking about one of pop music’s most important contemporary icons and the experience he brings with him, is saying quite a lot. What is definitely clear is that we are talking about a special, wonderful album that we at Elefant Records are proud to share with the whole world. Enjoy!